Writing is a Physical Act... 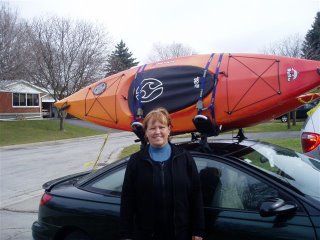 So you think writing is a cerebral activity, huh? Think again. Well, don't think - do.

I've been paying to be tortured lately (okay, okay, let's not go there....) by a physiotherapist. Yesterday, I think she did a handstand on one of my pec muscles. A "minor" muscle that she has decided is the real culprit in my shoulder woes. A few months ago my "typing" arm rebelled and refused to move at all. I looked like a chicken with my elbow pinned to my side. I've worked through all that, but now am left without a certain range of motion that I want to regain in order to best enjoy kayaking this summer (more about that later).

Okay, what's this got to do with writing beyond my not being able to type at the keyboard? Well, I've learned I have a repetitive injury caused by using a mouse, hunching at the computer, sitting improperly, and over-using shoulder muscles instead of using back muscles. I'm supposed to get up out of the chair and dance around and do wild crazy actions with my shoulders when I write. So I pass that writing tip along to you.

I'm also supposed to remember to press down my shoulder blades, and tuck in my chin in an unflattering posture. And I have a whole slew of teensy weensy silly exercises to do at the gym alongside the guys and gals lifting those really big weights. There's me, sitting on a weight bench and rolling one of those big exercise balls (straight from the old TV series "The Prisoner") in little tiny circles with my palm...

Okay, now the real reason for writing. A few months ago I posted a piece about bidding on an eBay kayak, so that those of you so inclined might get away from your computers, and join me on the river. I had decided I "needed" another kayak to add to my collection so that I could put you guys (one by one, and not all at the same time) in a stable light rec boat that wouldn't tip unless you did something really silly, like standing up and dancing in it. I lost the bidding war.

Anyway, yesterday I bid on another brand new eBay boat and it's mine! I pick it up in a few days. So, anyone want to join me (and BB too) for a short paddle on the river or at a conservation area sometime? And if your body rebels, paddling or writing, I know a really good torturer, er, physiotherapist...

-Xena, aka Marianne
Posted by Dove Tale Writers at 10:29 AM

LuLu can relate. I spent 3 months this winter being tortured in a mechanical traction machine by my physiotherapist in an effort to "fix" my lower back. The machine was something that would fit in fine at CTU (in 24). Hours and dollars later, my back still hurts. But I learned to sleep (and even dream) in the traction machine. At this age, give me a pillow and a flat surface and I'm gone. Torture or no torture.

I too have exercises that look completely wimpy at the gym. No barbells involved. I don't even get to use the exercise ball. Geesh...

And now my hip isn't working and subsequently my right leg won't move in the usual range of motion. This hip is prone to bursitis. I guess it has flared up again. Meanwhile Bob's hip isn't working either - his opposite hip. Hmmm... Maybe writing isn't the only dangerous activity... hope we can get a two-for-one visit to physio.

Congrats on your new kayak. If my back ever recovers, I might be able to sit in a kayak for say, ten minutes, without seizing up ... something to aim for. I'm sure you will have lots of takers.

Hey, I think it's about time we had a blog name to refer to Bob B vs. Bobby Bacon. Two Bobs get confusing.

Maybe you might ask, Lulu, what he'd like to be called when we refer to him on the blog?

I was once sent into physio therapy. I have a degenerative disk where neck goes over to back. Anyhow it hurt and so, dizzy spells. They hung me. LOL. A way to stretch the neck. It was worse than the initial problem. I chucked that and learned to live with it. It won't kill me. It has improved through time. At first I couldn't work on the computer without getting a terrible sore neck and head ache. I think when I learned better how to do it, I relaxed more, and the problem is gone.

So maybe, tension has a lot to do with these things? I find that walking outdoors always is very helpfull.

I bet you, Xena, that kayaking won't be a problem. It's relaxing to you. You can glide for spells too. Being outdoors is good. As opposed to serfing the net, indoors. Often when I am longer on the computer than I intended I am so tired I want to sleep. Then when I go out with the dog, in the fresh air, I am OK again.

Well maybe I cannot speak for you and Leslie. What works for one may not for another.

Maybe, Xena, limit being on the computer for a while to just the writing? I know, there isn't anything that you can do, like finding publishers and so, without computer. Everything hangs by it. But pacing yourself may bring improvement. The trick is to find the balance between work and relaxation. and even if what's supposed to relax you starts to be strenious, a change needs to be made. Thing is our bodies keep on changing and we need to listen to their complaints.

Congrats with the new kayak. I certainly would love to come. I made my life more complicated, I know, and I may not manage to be quite as impulsive as before. Which has to do with free will and newly set priorities. But still I will make great efford to come when you ask me to.

Hey Wild Thing, if you DON'T make the time to go kayaking with me this summer, then I'm selling YOU on eBay!

I was expecting a few salacious comments about Bob's and my hip problems... you are all way TOO polite.

Bambam won't work. Bad connotations (nickname of Bob's daughter by nasties at WCI who made fun of her). But he might want to be called Buck. That's his father's nickname for him. Buck and Bobby Bacon... that works, eh? Of course he has to decide.

Gotta get him blogging soon.

As the current took me down the river, I had to be careful of logs and broken branches. I got to the end of the run and I wanted to do it again.

I like fast water, fast water you ride. I like calm water, calm water you reflect. Now the conditions I don’t like, is having to head straight on in a strong current or wind. There is no time reflect.

Me, I like paddling into the wind. Not necessarily a strong wind, but enough that I can feel it.

As for physiotherapists, well, I'm convinced they are indeed useful. My arm feels absolutely wonderful, and is almost as good as new. Not quite, but I can MOVE it again. And no, the injury wasn't tension, Wild Thing. I'm pretty good at keeping a balance between work and play, so I'm not worried about computer time... Hey, you can't stop me from blogging THAT EASILY!!!! LOL!

I probably had a bad experience with physio. It helped when I broke my wrist, initially. But I stopped before it was suggested. From there on it went better, faster. I guess I'm weird.

So, what colour is the kayak?

Rather cold again, today. Snow is not out of the forecast yet. BB will have to have a bit more patience?

OK you can send me back to kindergarten. Wanna build wild sandcastles?

Snow doesn't stop kayaking. Only thing that stops kayaking is no open water. So ice is the culprit. Cold is actually very pleasant when dressed for it.

Today we kayaked on Guelph lake.

Okay guys, don't know if you're still reading, but that's the new boat in the photo...

Oh yeah, and me too.

Must be the week for dreams. I have had some doozies. Can't even begin to tell you... the unconscious mind is a place of great mystery, a wild place full of messages that are difficult to interpret (sometimes) or that hit you over the head (ther times)

I have no outdoors-y stories to share, but I pulled my first WEED on Sunday with Blackberry in tow on his leash. We both enjoyed that.

The boat is spiffy. Outdoors I don't like today. I've got a pesky cold. Sneezy coughy nuisance. Both Simon and Aries sleep contendedly. Last night was great. Nigel and me went to see Neil Young in the Princess Theatre, "Heart of Gold." A bit of a shock how old 'old Neil' looked. Not like that lank, spaced out druggy anymore. But his music is still great. After a while you don't see 'old' anymore. His eyes still look the same. He himself said: "Things have changed, but the spirit is still here." And that's so true.

Hey, a funny thing happens in time. We AGE!!! I bet none of us look like we did 20 years ago - and Neil goes further back than that, huh?

You know, I saw Kenny Rogers on TV last night - wouldn't have recognized him. But sheesh, people I knew in highschool wouldn't recognize me.

Good for these guys, still performing. Still being creative. One thing about being a writer. Words are upfront. Not our faces or bodies.

I sent an email photo of myself last year to an old friend from university who got in touch with me after many many years. She wrote back that she wouldn't have known me because I looked so different. And it was a good photo of me NOW... I was very surprised. Thought I was still the same. Still feel the same inside. Must not look the same on the outside.

But now that I think of it, she did not return the favour - no photo of HER was forthcoming. The big coward...

Nigel met an old school friend in England he didn't recognize. She recognized him. He asked how come. she answered, "I recognized your eyes and your smile."

The only thing I know is that when I show people old school pictures, they usually still pick me out from them. When I look in the mirror, or especially when I see a recent photo of myself,I don't know why.

Come share, exchange and debate with us at http://www.articlebeat.com today.