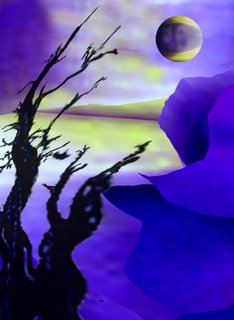 Most editing circle people know this poem/song. I always wanted it to be a song. There was a suggestion to do something about the fact that in first reading one is inclined to read plane tree. Plannettree just doesn't work nor does planet tree. It needs to sound like one word, rhythm wise. I sent this poem/song to Nigel in England. He told me as soon as he saw the text that the melody from "Do you know the mussle man" was in his head and he sang it. Refrain wise that works. But the middle needs to be played with. Anyone who read the poem and read plane tree first, also said that the pronoucation became clear after reading more. Nigel is of the opinion that it should stay as is.

A picture goes with this poem. It is as such in my documents. But frustratingly, that won't copy in e-mail nor blog. I hoped that would work. Oh well! Partly I set this up because I wanted to find out.

But some people have pictures with their blogs. Does that need to come from digital cameras? Would artwork work at all?

And BB you think you are weird.

Beyond her wildest dreams, aka Wild thing.


p.s. I wonder what the transferring of above poem will do blogwise. Will it keep my linebreaks?
Posted by Dove Tale Writers at 12:00 PM

I read plane tree. All the way through. Even though I have read this poem before...

you can add art work or pictures...I can pick you up some night early for editing circle and I will show you how it can be done...

Hope you don't mind I just wanted to see if art work would work in the blog. it does..

I can remove it if you wish..

No Bob, you don't need to remove it. It is a lovely, intriguing, colourful, and artistic picture. I would like to combine the poem also with my drawn planetree, which includes the moons. It's just a line drawing and it is in my documents with poem and drawing in one. We are finding out things here and to see the progression, seems to me, only makes it more interesting. And thank you for offering to pick me up some time earlier before ed. circle and show me how to do it. I truly appreciate that. I also have the drawing separate in my documents. Perhaps that works better then?

So mp (is that xena?) it does work with picture for you? But I have always presented it with a picture before. Prior to the line drawing done on computer, I had a coloured collage.

Where did that picture you used come from, BB?

I collect images..I can't remember where I got that one..

Well, actually, I still think if you're counting on a visual reading of the poem - on paper - you might want to write planet-tree.

If it's sung, it doesn't matter.

To all of those who voted green in the last election, and you know who you are out there in the bog, I mean, blog, I left you a message on Larry's bog, I mean, blog - see Tweedle dum and Tweedle-dummer.

Larry sez, wt, if you have or know someone (like him) with a scanner, it is possible to scan your own artwork, if it's small enough to fit on the screen, save it as JPEG and post that on blog.

I'm enjoying this lily blog so much... I posted my "two flies worth" on the Alpha Frog and the Stories in my Head postings.

netty know no one with scanner.
neither does wild thing.
oh well is ok. can't have it all.
so they say.

it's fun to play to xperiment
outcome less important
it's fun to say, hey, at
least i tried...

no, no, nanetty. larry sez, someone like him cuz he has printer/copier/scanner aka 3in1. for future reference if you want to place artwork.

larry has all those treasures. lucky larry. larry wants to share with nanetty. maybe in summer when nanetty that wild thing races around on her bicycle and gets places that way. in this frozen tundra she not get far. take long time to walk. no take long to slip and nasty, nasty fall. Like once break wrist and once sprain other wrist and once fell hole in head, and magination pouring out rising sky high into wide blue yonder.
that's how brain gets writersblocked and nanetty has to wait for the sky to come down and whisper lost ideas back to her. maybe she should write about airplane tree, a planetree with wings, plain wings, a tree to fly away with into that blue yonder and find the plane where lost ideas are planted like flowers and offer their pastel petals to draw pictures of wildy dreams dancing through her head.

What is a free gift ? Aren't all gifts free?

C++ should have been called B

What is a free gift ? Aren't all gifts free?

When there's a will, I want to be in it.