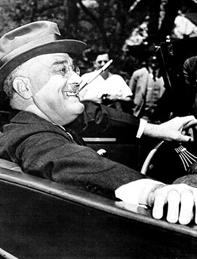 Franklin D. Roosevelt is one of my heroes. I believe he had greatest impact in the history of the 20th Century.


Disease was paramount in shaping his leadership. There is some doubt now whether he had polio. Researchers in a 2003 article in a medical journal suggested there was evidence that Guillain-Barre syndrome -- not polio - may have been the cause of Roosevelt's (FDR's) paralysis. No one will ever know for sure.

The important aspect is how this disease shaped the man. He spent time in a place called Warm Springs that offered warm buoyant mineralized waters. His time in Warm Springs brought him into contact with everyday people with difficult problems.

If interested in learning more pick up the Warm Springs DVD. It tells a story in history that few people know about.

I concur - to all of those in particular who have been reading Shirley's story about FDR & polio as part of the editing circles - take a look at "Warm Springs"...